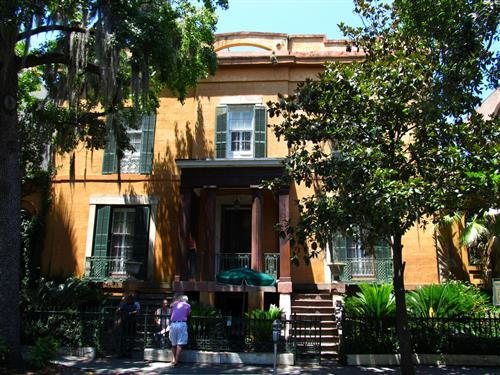 Most of the ghosts that haunt this home date back to the late 1800's and the stories surround two suicides that took place here, although it is claimed that one of the suicides may have been a murder. The home was once owned by Francis Sorrel, who had made one of his slave women his mistress. His wife, Matilda ended up finding out by catching them in the act. She was so distraught that she hurled herself off the balcony of her bedroom and died in the courtyard below. Not long after Matilda's death, the slave, whose name was Molly, was found hanged in her bedroom in the carriage house. It has been reported that journals and letters that were found indiciate that Molly did not committ suicide, but was killed by a member of the Sorrel family in an attempt to keep her quiet about the affair. However, this cannot be confirmed and the papers are not on display. Witnesses have claimed to see shadowy figures in the windows and voices can be heard from inside the house and the carriage house. There is a "Lady in White" spirit that is said to come into sight on one of the parlors, as well as a group of grand dame ghosts who also occupy the ladies' parlor and disapprove of the tours. This home has been featured on both a Halloween episode of "Ghost Hunters" and the HGTV show "If Walls Could Talk." This hsitoric landmark is open to tours and has day tours that focus strictly on the history of the home, while the night tours focus on the ghost stories!